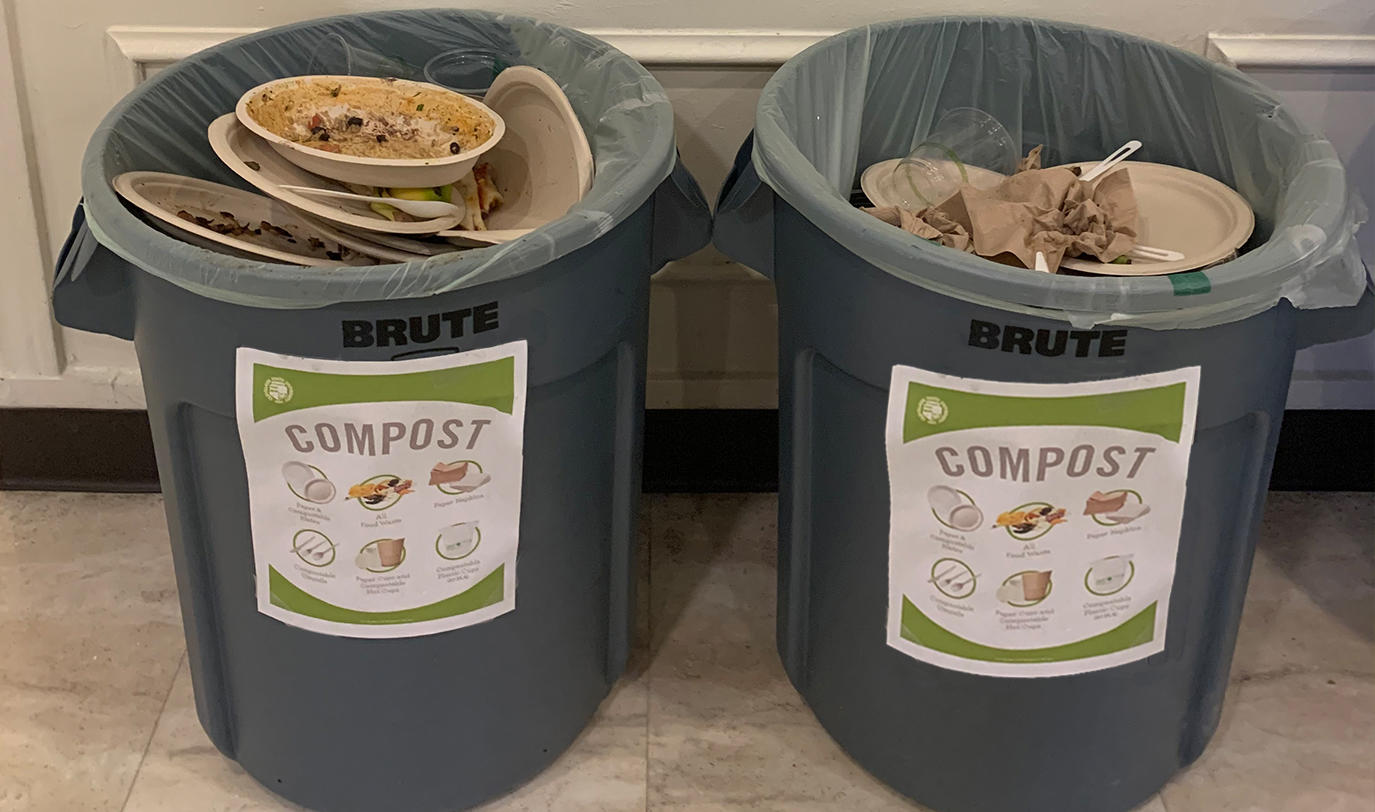 How a College Student Piloted a Composting Program at His Fraternity 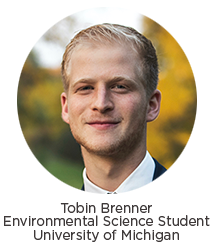 In an effort to reduce his fraternity’s waste footprint, Tobin Brenner, an Environmental Science student at the University of Michigan, set out to start a composting program at his Social Fraternity, Delta Tau Delta. As the house’s new Sustainability Chair, Tobin wanted to make the meals he and his 28 housemates ate each day less harmful to the planet.

According to Recycle Works, the average college student wastes about 142 pounds of food, and likely lots of packaging, each year. Tobin knew that this undertaking wouldn’t be easy — the social fraternity barely had a recycling program in place and some of Tobin’s housemates had doubts as to whether a composting system would be successful. However, Tobin realized that if he could get a composting program in place and make it easy for his housemates to use, the impact could be huge.

"If you want people to start composting, you have to make it the most convenient option."

The University of Michigan is located in Ann Arbor, a city that’s quite progressive when it comes to waste management and composting infrastructure. Ann Arbor runs a residential compost service and on-campus composting programs and compostable foodservice ware are also readily available. When students are done eating in the school’s dining halls, they place their waste on a conveyor belt that goes directly back to kitchen staff who then separate the compostables, recyclables, and trash for proper disposal. The success of this system is part of what inspired Tobin to get his fraternity’s composting program started. Here's his 3-step process: 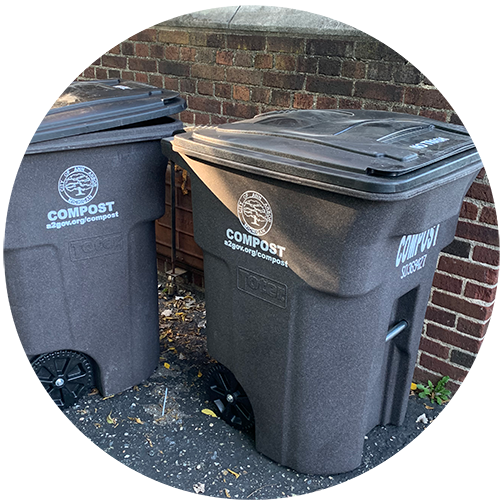 Like many new undertakings, the first step involved thorough research. Tobin began by reaching out to the city of Ann Arbor. Fortunately, the city has a very progressive compost pickup service and provides curbside compost carts at no charge while accepting a vast assortment of compostable materials including food scraps, yard trimmings, and World Centric compostable tableware. Based on the number of people in his household and the number of meals they have delivered each day, Tobin estimated that his house would need two 96-gallon compost carts to be picked up each week. 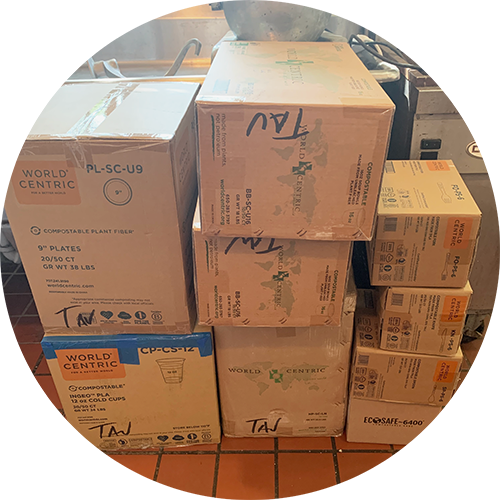 Next, Tobin needed to switch the house’s tableware from plastic to compostable. He worked with BlueSky Compostables, a local restaurant supply store in Michigan, to supply his house with World Centric plant-based compostable plates, bowls, cups, utensils, napkins, and waste bags every month. In order to minimize waste further, Tobin explains that he closely monitors these supplies himself. “Everything we use now is compostable, but that doesn’t mean we can waste it. I keep everything in a locked cabinet to prevent people from taking more than they actually need.” 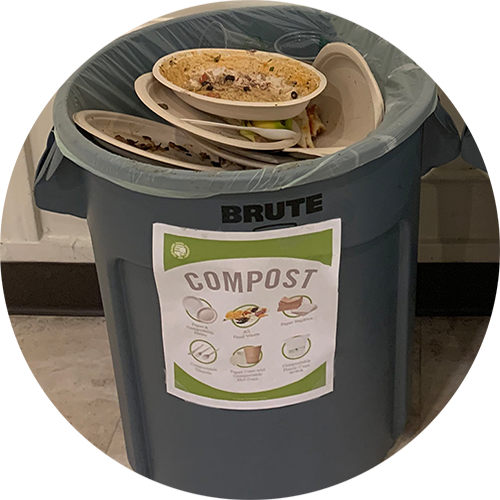 Finally, Tobin set up clearly labeled bins in the house’s dining room so that waste could be properly separated. The labeling has been one of the most important components in making his program successful. “We keep all of our bins clearly labeled with signs that show people what to put where, what’s compostable and what’s not. The signs are taped both on each bin and above each bin, making it hard for people to miss. Plus, we encourage everyone to eat in our dining room where the bins are, preventing waste from being mismanaged and ending up in trash cans throughout the house.”

Tobin realizes that in order for his program to be successful long term, it needed to be well managed. “Composting is a continual process that you need to stay on top of. I take the responsibility in our house to replace the compost waste bags when full as well as bring the city-provided compost carts to the curb each week before its scheduled pickup. Though these seem like small tasks, they make a huge difference in keeping our program successful.”

Tobin also explained the importance of making this program sustainable for the house to adopt permanently. “I want to show people in this house that composting isn’t a temporary thing, but rather something that should be happening regularly. Next year I won’t be living in this house, and so I’m doing everything I can now to make this program another regular habit for my housemates and set the groundwork for the next Sustainability Chair, turning over the responsibility seamlessly.”

"I want to show people in this house that composting isn’t a temporary thing."

Just in the first month of starting the composting program in August, 2020, Tobin was able to divert over 224 pounds of waste from Delta Tau Delta, an incredible feat that didn’t come without its fair share of challenges. At the start of his program, Tobin had to invest time to inform his housemates on how to separate their waste, to ensure that pizza boxes and beer cans ended up in recycling instead of compost bins. To tackle this, Tobin makes an effort to regularly communicate with his housemates, reminding them what’s compostable and what’s not.

“I try to be as understanding and patient as I can. I always make myself available to my housemates to answer questions around sustainability and our composting program. At the end of the day, in order to create behavior change and help people create more sustainable habits long term, you need to be a voice that people can listen to.” 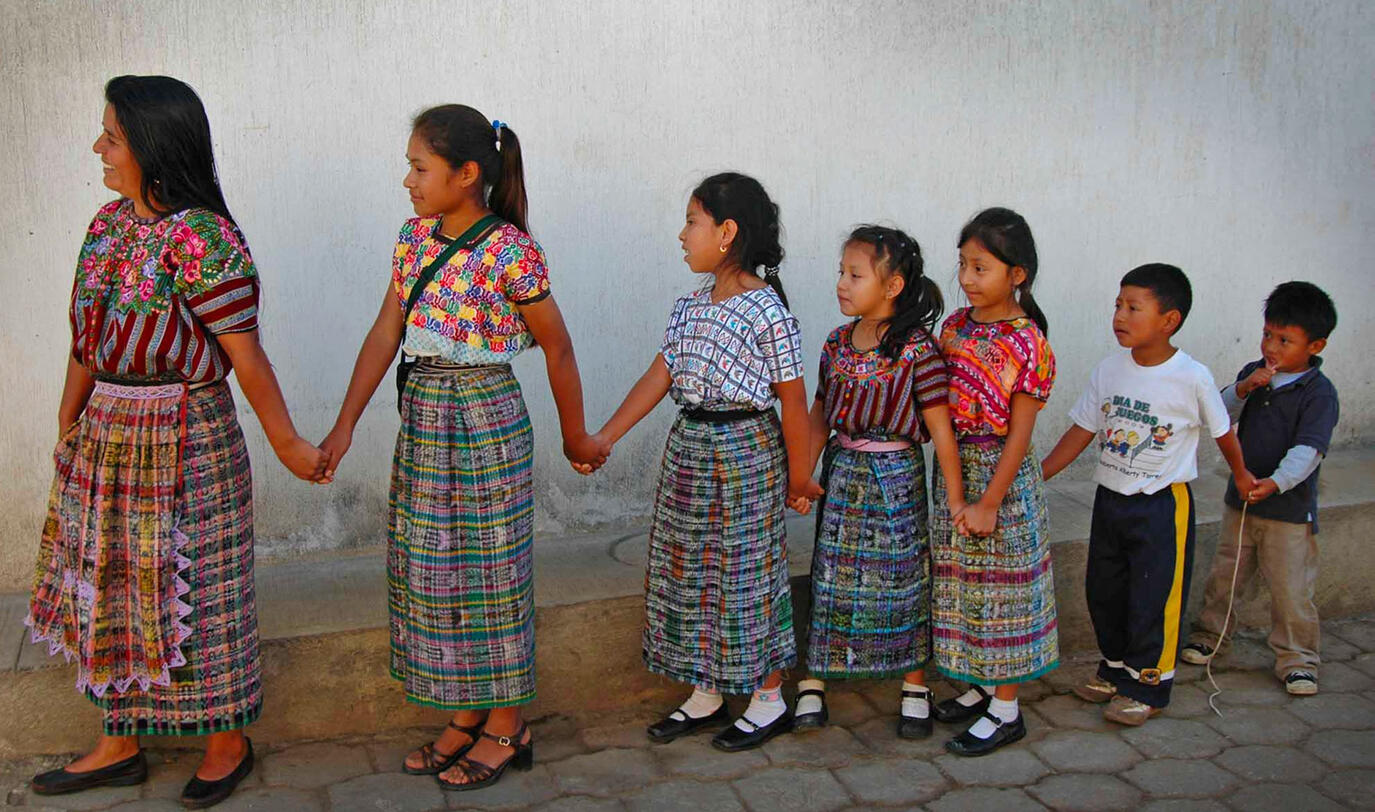 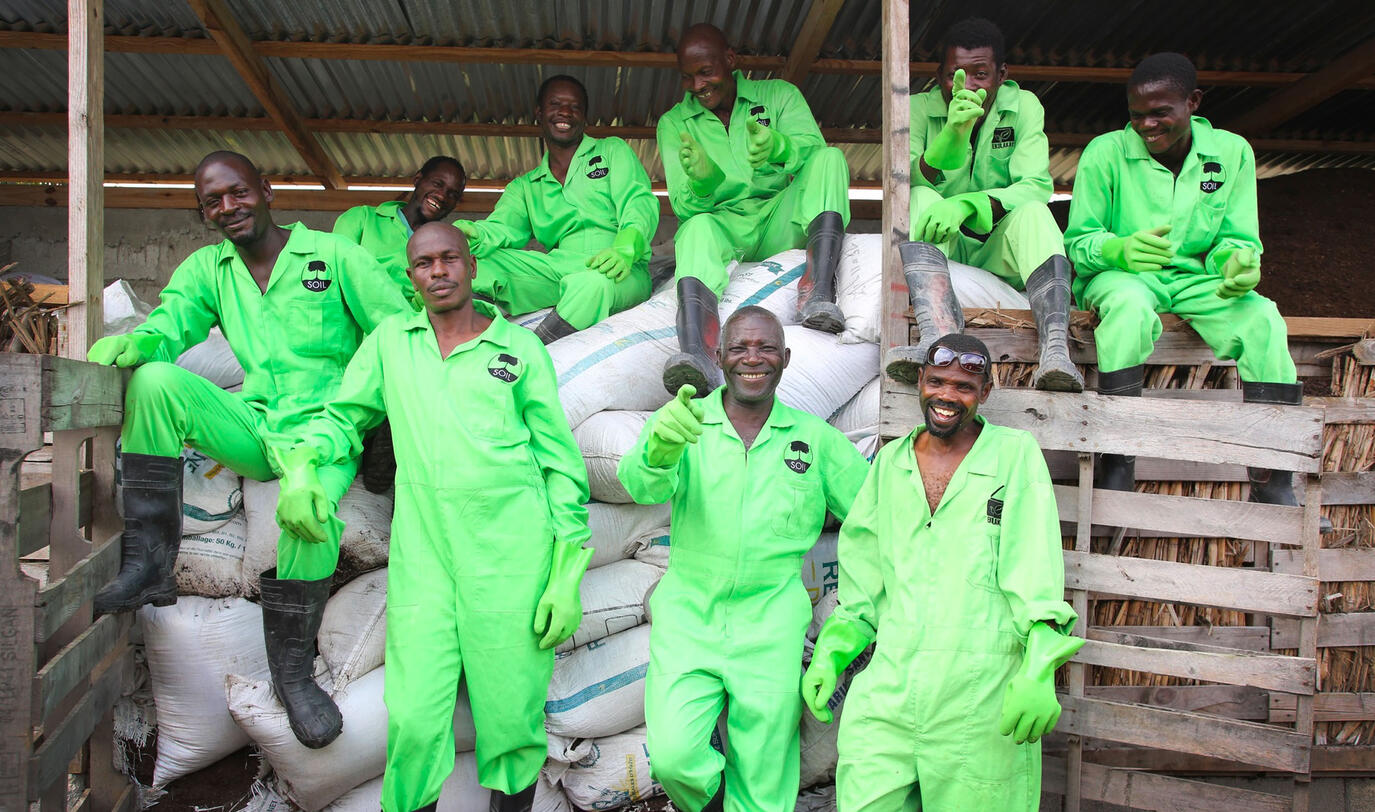 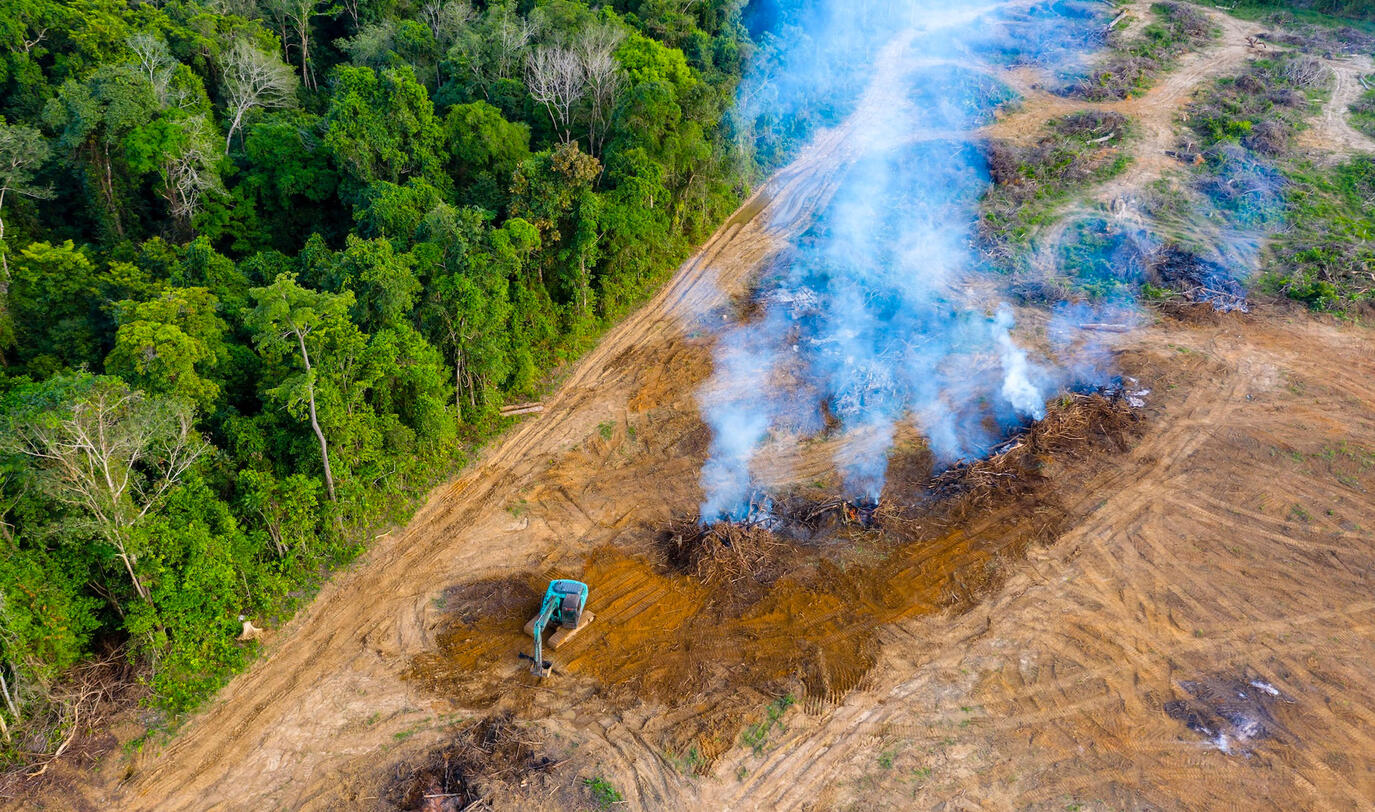